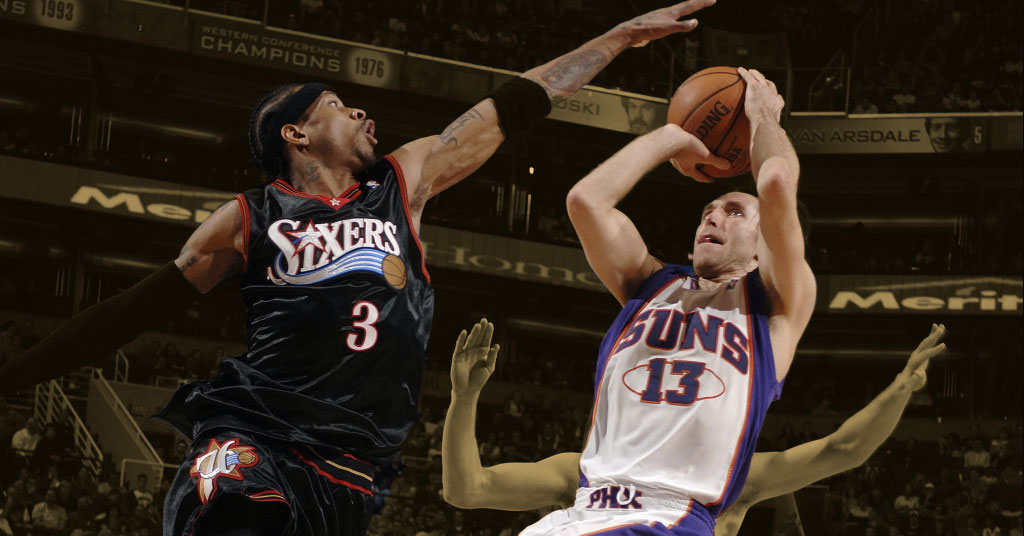 It’s fair to say that modern NBA statistics are spiking in some respects. As USA Today put it in 2018, teams today are scoring “like it’s 1985,” and offensive numbers haven’t gone down any since. Teams are shooting more three pointers than ever before by an astronomical margin, and it is entirely ordinary to see scores in the 120s and 130s on a regular basis at this point.

Naturally, this kind of league-wide offensive spike has had major implications on fantasy basketball. Expectations for players’ numbers are simply higher than they’ve been in the past. And while NBA historians will understand that these spikes happen over time, it is still interesting to look at how they happen. Some of it comes down to rule changes, like the NBA cracking down on hand checking or, going back further, even the introduction of the three-point shot. But a lot of what we’re seeing in today’s fantasy performances can be traced back to how specific players influenced the modern game as well.

Steve Nash only retired after the 2014 season, and so is a fairly modern player himself. Nonetheless, the league has changed a great deal since his time. Nash was famous for being the heart and soul — and floor general — of a Phoenix Suns team that changed NBA offense with its “seven seconds or less” mantra. He pushed the pace, set up teammates, and generated more open shots than most defenses could keep track of. Nash seemed at the time like an aberration, but in retrospect he looks more like a pioneer. In the 2010-11 season — Nash’s last with the Suns not counting the 2011-12 lockout year — Phoenix shot 1,857 threes. That was an extraordinarily high number at the time. In 2018-19, the San Antonio Spurs shot 2,071 — and finished last in the league in attempts.

As for individual players Nash’s style influenced, it’s almost difficult to narrow down the list. We’ve remarked on James Harden and his importance to the Brooklyn Nets offense, and he is perhaps the most interesting Nash disciple given that he’s currently being coached by Nash. But there are shades of the former Phoenix point guard’s influence in numerous other players as well, from Stephen Curry, to Luka Doncic, to Harden teammate Kyrie Irving and more.

Allen Iverson is a singular figure in NBA history who established a legacy — before, during, and even after his career — as a world beater. In high school he was a vaunted basketball prospect, and yet just last year an Iverson football mixtape elevated by The Spun showed that he had elite potential in multiple sports. He enrolled at Georgetown fresh off a waived jail sentence and stunned the sport of college basketball with his quickness and scoring ability. In the NBA he was an 11-time All-Star and the 2001 MVP. And even in his post-playing days he’s continued to be a dominant competitor, now at the poker tables. Poker.org outlines how Iverson can now be found at professional tables alongside Phil Ivey (whom many consider to be poker’s GOAT). The guy simply wins, no matter the odds.

That may not seem to have direct fantasy implications. But those who remember watching Iverson can connect the dots. At just 6’0’’, Allen Iverson had no business dominating basketball the way he always did. But his will to compete, his ability to maximize his talent, and his utter fearlessness in the face of long odds got him to the top of the sport. Today, we see a number of high-level fantasy performers (many of whom will have watched A.I. as kids) following that example. Curry, Irving, Damian Lillard, Ja Morant, Trae Young, and even Isaiah Thomas have all dealt with certain disadvantages relating to size, exposure, or general doubt. But they’ve powered through to dominate, in no small part because Iverson proved all those years ago that it was possible to do so.

Nash and Iverson played major roles influencing modern guard play in the league, and the extraordinary stats said play produces. But another factor in the nightly offensive explosions we see in today’s NBA is the evolution of the big man into a perimeter threat. This is not an entirely new phenomenon. Way back in 2013 in fact, a piece by SBNation.com took a detailed look back at some of the “stretch 4s” of the ‘90s and got their thoughts on the changing nature of forwards and centers. So even eight years ago, the migration of larger players out to the perimeter was becoming evident.

Nevertheless, there was a certain point at which this migration became more pronounced, and Dirk Nowitzki was right at the center of it. Long recognized as a one-of-a-kind big man with an ability to step out and shoot threes (he attempted nearly five per game even back in the 2000-01 season), Nowitzki’s late-career renaissance helped to solidify the style of play as something beneficial to a winning NBA team. In hauling the Mavericks to the NBA title in 2011, in his age 32 season, Nowitzki showed that a versatile, shooting big man could be a championship team’s best player. This happened even as Chris Bosh was gearing up for consecutive titles with the Heat, Kevin Durant was becoming a dominant force in the league, and stars-to-be like Nikola Jokic, Kristaps Porzingis, and Nikol Vucevic were no doubt watching. Nowitzki is as responsible as any one person could be for the numbers we see from NBA big men today.

The night-to-night numbers in NBA fantasy these days are outrageous across the board. And again, some of this is simply a result of the way the game evolves over time. It is also fair to say however that figures like Nash, Iverson, and Nowitzki — all former fantasy stars in their own right — set the tone for those DFS wins you rack up courtesy of the Harden and Jokic types in today’s league.